And Armando can’t thank the agency enough for that.

Armando Galindo thought he was part of an exclusive group when he was a member of Polson Club. It was a place where he could do everything from chocolate milk drinking contest to playing dodgeball with his friends. With the amount of fun he had with staff and other members, there were many days where he felt like his time at Club was too short.

The walls surrounding Polson Club provided him with a safe and supportive place to be – outside of those walls however, things were much different.

As a young teen, Armando was bullied. The constant torment and ridicule became a painful reality that affected him in many ways, especially around trust.

“I always felt suspicious about people when they were being nice to me,” he says, “I didn’t believe I had real friends.”

His only goal was to survive what he describes as the darkest years of his life, and the challenges he faced led him to a deep depression he could not shake. Feeling alone and unhappy, Armando often thought of suicide as a way to cope with his pain.

But that’s where Boys and Girls Clubs stepped in.

Armando met Alazar Awegachew and Cindy Kirupakaran, both former Club staff at Polson who guided him out of his shell – it was one of the first times Armando felt respect and belonging. He also met Michelle Schmidt, Director of Programs and former Polson Program Coordinator.

“Michelle picked me out and acknowledged leadership abilities I didn’t know I had,” he recalls, “She encouraged me to take on opportunities I didn’t believe I could do. If it wasn’t for her, I wouldn’t be where I am today.”

And those opportunities were critical to Armando’s development.

He took part in Youth Council and Power Up! and was a Site Coordinator for the Sears Tree of Wishes Campaign. Through each subsequent new program he joined or challenge he took on, he became more confident in himself and his abilities.

“When I first met Armando he was very reserved and wary of others,” says Michelle, “When I walk into a Club now and watch him interact with our kids, I can only be proud of how much he has grown. I am excited to see where Armando’s path will take him and honoured that Boys and Girls Clubs gets to be a part of his journey.”

Building those meaningful relationships of trust marked the beginning of Armando’s recovery process and has given him the courage to talk openly about the past. The positive mentorship he received as a member allowed him to develop a new-found confidence that can be seen in his current role as a volunteer and most currently, a student with the Youth Recreation Activity Worker Program. He hopes that one day he can be a Club Manager for Polson.

“I’ve been given so much respect. People that I don’t even know treat me well and it feels great knowing the kids look forward to seeing me at Club,” he says.

It has certainly been a turnaround for him. The support and guidance he received has paved a new path of self-discovery and Armando can’t wait to see what life has in store for him next.

“I owe the majority of my recovery to Boys and Girls Clubs. They provided the stepping stones for me in every crucial stage of my life and I can’t thank them enough for that.” 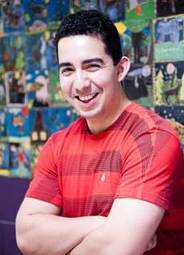