“Even if you’re from the inner-city, you can still do amazing things.”

Kenesha Pingues-Giles is living proof of that.

Everyone knew that Kenesha had a gift the moment she picked up a basketball.

As a young member, Kenesha spent most of her time playing soccer at the Sister MacNamara Club but discovered a new passion when she played her first game of basketball with the Club through the Winnipeg Minor Basketball Association. The thrill of the game fuelled her interest for the sport and she hasn’t stopped playing since.

Throughout her basketball career, she has won many games and championships through WMBA and school teams. With more than three provincial championship titles under her belt, her talent has taken her across Canada, competing in Canada’s Under 15 National Championships in Kamloops and the Canada Summer Games in Prince Edward Island. Recently, Kenesha’s Collegiate Wesmen basketball team won the AAA Provincial Championships and received an all-star award for her outstanding performance. She has received many accolades to recognize her athleticism including the Harry Jerome Award for Athletics in which she was flown to Toronto to receive the award.

Registration fees, equipment and transportation costs, however, can add up, and Kenesha acknowledges the financial burden that sports can have on families today. “Between my brother and younger sisters, I know my mom would have a difficult time paying for our heavy involvement in sports – but that’s where Boys and Girls Clubs steps in for us,” she says.

By removing barriers to play, Boys and Girls Clubs provide recreational opportunities to members at no cost, allowing families to stretch their dollars further. Kenesha also took advantage of the wide variety of programs available to her including Youth for Eco-Action, Torch Club, and Girls Night Out. As one of her long-time mentors, Gerald Villegas encouraged her to explore new things and says that along with basketball, the Club and programs played an integral part in developing her self-confidence and social skills.

“Over the years, I watched her gain more confidence – it’s amazing to see her unlock some of that potential. I know from speaking to her grandfather and mom that the diverse programs offered by Boys and Girls Clubs contributed so much to the person she is now and all of her achievements,” says Gerald.

Kenesha’s success stories off the court are just as stellar as her game. She has maintained 85% or higher on the honour roll and won citizenship awards for her contributions to the school and community. Now in her graduating year at the University of Winnipeg Collegiate, she is looking to purse post-secondary education in Criminal Justice or in Politics and Governance. Eventually, she’d like to fulfill her long-term goal of becoming a lawyer.

When asked about reasons why youth should be members, Kenesha smiled. “Every chance that I get, I make sure to tell people that the opportunities at the Clubs are a great way to discover some of the wonderful things this world has to offer. It’s just a good place to be. It truly is.” 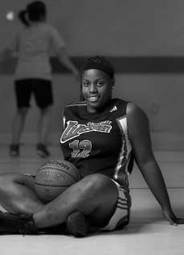